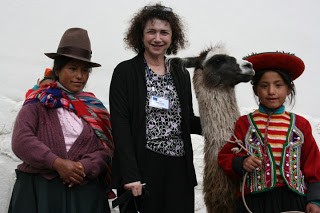 We woke up at four a.m. for our flight to Lima. The Boeing B757 Monarch jet is a far cry from our economy continental seats on our flights to Florida. Everything and every seat is first class. Greeted by black leather gloved flight attendants in full retro stewardess dress, complete with hair pulled into buns and Jackie O hats, we are directed to our seats. Flower arrangements and trinkets are displayed as we are handed champagne, mimosas, and a freshly prepared multi-course meal. Each seat is equipped with little kits of amenities and tote bag to put them in. To sum it up: we are pampered. Three interesting lectures on the flight from our experts set the stage for the weeks of experiences to come.

As we transfer in Lima to the chartered flight to Cusco, no one mentions that the delayed morning flight that has pushed the timing of our morning (now afternoon flight) on the smaller Air Ecuador airline. Airlines do not normally fly to Cusco after noon, because the combined wind and altitude make for treacherous landings. This flight, however, is uneventful except for the occasional glimpse of the rugged Andean mountains below.

Cusco is over 10,000 feet in elevation, but we are prepare and have taken a high altitude pill. We are greeted with colorful hillsides covered with homes at various stages of completion and public utilities. Our guide explains that unlike our country, even though these hillside homes may have fantastic views, their distance from the city, it’s utilities, and improvements makes them less desirable. Mostly country dwellers who live very far from the city attempt to homestead. Through a complicated system of claims and permits, anyone can claim a patch of land (usually groups of ten to thirty) for a small fee and start to build. They usually live in the building shell, which is financed through their menial job income, so the building process can be slow. They are without water, electricity, sewers, or other services for a long time-five years or more.

The city of Cusco is a vibrant community surrounding a Plaza De Armas as well as thirty churches. We arrive on a Sunday and what appears to be cheerful and strikingly attractive people stroll around the square reflecting a cultural “stew” of native and European backgrounds. We watch a young girl dressed as an angel being photographed on the steps of one of the 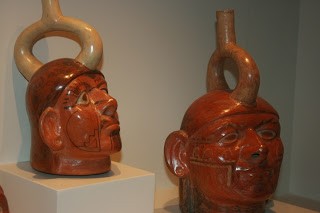 Many of the buildings in the city are built on foundations by the excellent Inca masons hundreds of years ago. Their stonework holds up centuries later as fine craftsmanship.

We are whisked right to a reception at the Pre-Columbian Museum to view interesting artifacts from the Pre-Inca and Inca art as well as our first samples of the flavorful cuisine of the Andes. The popular dishes served here show influences of Inca and other indigenous groups’ heritage, European influence, and the limitations of what can be grown at this altitude. We enjoyed it very much.

Our favorite dishes from Cusco:

We are told that coca tea (mate de coca) helps with altitude sickness and we are served some at every turn. Quite enjoyable, it gives a lift, sort of like coffee but with a clean energy without coffee’s “edge”. The DEA probably wouldn’t like it but it seems like a nice way to start the day, or for that matter, a late afternoon pickup. Our trip leader later strongly insisted that we not try to bring any coca leaves on board the plane as it’s not allowed in Australia or the US for that matter. 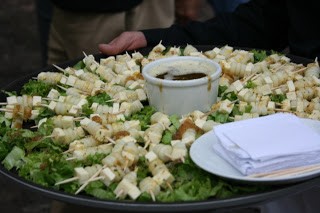 We check into the Monasterio Hotel that is built on the site of the Inca Amaru Qhala Palace. Originally a seminary until the 1960’s it still retains its distinctive historic character and most of the original religious paintings. Four 16th-century cloisters are grouped around the courtyard and a 300 year old cedar tree. It’s hard to figure out how the rooms were divided and made into beautifully appointed hotel rooms. Dinner is served in one of the private dining rooms and like ducks being prepared for fois gras, we open our mouths wide and often.

After an excellent dinner in the hotel dining room and another high altitude pill, we sleep soundly underneath the ornate paintings.

Please Note: We respect your privacy and we will never sell, redistributed, or spam your inbox.

Now you can suffer at home!

The Reviews Are In!

Very neat little place! Had a wonderful lunch here, surprisingly tasty vegetarian options!
*The veg. tamale was so good! Beautiful and had all the goodies! Not a skinny little tamale!
*Sweet potato fries were SAWEEET! (Would be killer with pink fry sauce)
*Guacamole was awesome, a little too limey for me but my son and daughter-in-law thought it was perfect!
*Tofu torta was tasty.

Perfect, friendly service, wasn’t crazy busy which was NICE!
Portions were generous and the presentations of the dishes were nicely placed and served on my favorite home dishes, Fiestaware!

One of my neighborhood favorites! I love the eclectic options with spicy flavors! I also like their cocktails and beer choices! Today I had Sasquatch Coffee Lager and my go to dining option of a Molly Tamale. I enjoy the atmosphere and energy of this colorful restaurant.

One of our favorites in the area and always has delicious food. We've tried a ton of different things on the menu and everything is a winner. The Molly's tamales are my ho to but everything is great.